Settlements
The 1st permanent settlement within Radford's present boundaries occurred at the New River crossing of the Wilderness Road. 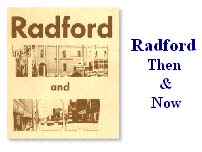 Radford's section of this road is known as Rock Road and here in 1762 William Ingles and his wife, Mary Draper Ingles, established Ingles' Ferry. The ferry became the nucleus of a commercial center which was to have, among other businesses, a tavern, blacksmith's shop and a general store.

The coming of the Virginia and Tennessee Railroad in 1854 brought a marked change in orientation for Radford. A depot was constructed at Lovely Mount and because it was situated halfway between Lynchburg and Bristol, it was named Central. Its midway location also led the railroad to build repair shops at Central stimulating residential and commercial growth in the village.

When the railroad arrived, Lovely Mount had a population of 30. Two years later, when the first scheduled trains ran, there were over 100 people, a roundhouse, repair shop, workmen's homes, a tavern, restaurant and general store. Gradually trade was taken away from Lovely Mount Tavern and Central became the commercial center, serving as a shipping point for the area's products. These products consisted of tobacco, bacon, and lumber.

In 1872, the New River Railroad, Mining, and Manufacturing Company chartered to build a railroad from Central to the Pocahontas coal fields in West Virginia.

It was 10 years before Pocahontas coal reached Central (the railroad by then operated by Norfolk and Western), but this enterprise, coupled with a road to the Cripple Creek iron mines, spurred a boom in Central. Land development Companies were formed and subdivisions planned.

The Radford Land and Improvement Company developed much of the area that was to become West Radford. Several other companies developed East Radford and the area around the New River depot across the river. Industry was promoted and during this time an iron foundry, brick works, lumber companies, a knitting mill and a stone quarry came into being. Virginia Iron, Coal and Coke Company was a major employer.

They were called Radford (east side) and West Radford. By 1892, the 2 Radfords merged politically and, having the required population of 5,000, attained city status.

The Panic of 1894 put an end to Radford's boom. The city population between 1890 and 1900, but in the twentieth century began slowly to grow again. Several Radford industries began between 1900 and 1930. These included Radford Ice Manufacturing Company (1916), Clover Creamery Company (1922), West End Milling (Lewis Harvey and Sons, owners), and Norfolk and Western Timber Preserving Plant (1921). The Lynchburg Foundry acquired the Radford Pipe Works (opened in 1892) in 1905.

The State Legislature selected Radford as the site for the State Normal School (later named Radford College) in 1913. This added a new element to the city's economy, but also a new divisive factor. East Radford had started as the commercial center and now was the educational center. West Radford was the industrial sector, although some of the city's finest homes were also there. A sometimes intense rivalry developed.

In an era when paved roads were scarce in Southwestern Virginia, it proved a boom to the city to secure the passage of the Lee Highway through its center in 1920. By 1928 there were 15 industries in Radford employing 980 workers (Norfolk and Western and Lynchburg Foundry were the major employers) and 84 retail and wholesale establishments employing 245.

Its population approaching 6,000, the city had 3 banks, 3 hotels, 2 motion picture theaters and 2 weekly newspapers. The decade saw the addition of a few other industries, including the New River Textiles, unit of Burlington Mills, and the Old Colony Box Company. Also, during this time Appalachian Power's Claytor Lake Dam was built which brought further economic modernization to the area.

During the 1930's the federal government had decided the Radford area was a choice site for a major industry requiring ample space, plentiful water, good transportation and a large work force. Radford "powder plant" or Arsenal was built in 1940-1941 to manufacture gunpowder and associated products. 10 War time employment exceeded 20,000.

Three housing projects were developed in Radford to accommodate the rapid influx of people. These were Monroe Terrace, Radford Village, and Sunset Village. Fairlawn, which is the area across the river from Radford to Pulaski County, was also developed at this time. Hundreds of freight cars and no fewer than 12 passenger trains passed through Radford daily during the peak of the war time economy.

The rapid population growth (to 12,000 in 1943) necessitated change in city government as new and increased services were needed. New committees and boards were established and a fine recreation expansion and establishment of a Community Hospital and Chamber of Commerce.

The post-war years saw a sharp decline in population followed once again by slow increase. In 1957, the city joined the New River Valley Industrial Commission to help attract new industries to the city. Since then several companies have chosen to locate in Radford, among them the Inland Motors Division of Kollmorgen Corporation, Kenrose Manufacturing Company, Brad Ragan Rubber Company, which was originally the Graflo Rubber Company, and the RADVA Plastics Corporation.

The growth of Radford College, given university status in 1979, has influenced the character and development of east Radford. The concern for education and juvenile after-hours behavior was the basis for Radford's achieving "All American city" status.

Radford has continued to evolve over the years.  As some industries have moved out of the city, others have located here.  Radford today has a diverse economy with a significant manufacturing base with several companies making motors that are found on every continent on earth, under the sea, and in space above.  Education is still a top priority for the community with an outstanding Radford City Public School system and Radford University.  Radford is a recreation center for the New River Valley, hosting numerous tournaments and events every year.  The Riverway is a signature hiking and biking trail in the region. The riverfront in Radford is highly utilized and serves as a point of pride for Radford as it is known as "The New River City."

Radford in the 21st Century still connects back to the very first people to pass through this area.  It is a community of journeys and exploration.